§16§The designers Jasper Morrison and Naoto Fukasawa have compiled 204 everyday objects in search of "super normal design": alongside examples of anonymous design like the Swiss Rex vegetable peeler or a simple plastic bag, there are design classics like Marcel Breuer's tubular steel side table, Dieter Ram's 606 shelving system, or Joe Colombo's Optic alarm clock of 1970. With products by Newson, Grcic, the Azumis, and the Bouroullec brothers, it also represents the generation to which Morrison and Fukasawa belong. The phenomenon of the super normal is located, as it were, beyond space and time; the past and present of product design both point to a future that has long since begun. The super normal is already lying exposed before us; it exists in the here and now; it is real and available: we need only open our eyes; Fukasawa and Morrison make it visible for us. §04§Forewords: Absence, ambivalence, and paradox - Silvana Annicchiarico; The Visualizers - Gerrit Terstiege.- Photographies and short descriptions of the objetcs.- Statements by Jasper Morrison and Naoto Fukasawa.- Interview with Jasper Morrison and Naoto Fukasawa.- Comprehensive catalog of the objects. §02§Jasper Morrison was born in 1959. He studied at the Kingston Polytechnic Design School and the Royal College of Art in London, and since 1986 has run his Office for Design in London, with a branch in Paris. He has worked for, among others, Alessi, Canon, Rosenthal, Rowenta, Sony, Vitra International, Samsung Electronics, Muji, and Olivetti. 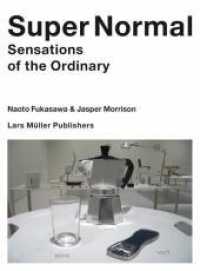